I have an upcoming presentation on both the short story and the film and I made a promise to write up a review so while I make very chur very extensive preparations for the presentation like screenshotting 250 pics from the movie and read a dozens of theories I thought it’d be fun to share them here. So in this “Notes on” you can see what I learn from film classes (writing down all sequences and what happens in them) as well as some commentary I made along the way! Nói chung là lỡ screenshot 250 tấm ảnh với cả take note dài dài mà bắt mỗi teammate đọc thì tội nghiệp quá thôi share lên đây ahihi cho bõ công sức =)))

I. Things to think about after watching the film:

3. From the observations above, what do you think is the main story of this movie: the heptapods or the child? → Do you agree or not? Do you think either story needs to be given more attention?

4. What do you feel about the “flashforwards” in the movie?

5. How is your experience of watching this movie different from reading the story? Is the adaptation the same as the original story? Why? Why not?

6. Why do you think the movie is called Arrival, not Departure, or The Story of Your Life? What’s the significance of “Arrival” then?

7. Pick a scene you like and talk about it!

8. How does this movie influence your way of thinking about time and the language(s) you use?

01:34: Opening Montage (soundtrack On the nature of daylight by Max Richter); Child Sequence 1

59:32 – 59:43: child’s project Mommy and Daddy talks to animals, drawing of mother and father with a bird in the cage (is it the bird in the cage at the heptapod working place?) → recognition: oh, it’s the two of them! The “flashback” hasn’t even started yet so this is a flashforward!

The Sarpio-Whorf hypothesis of language about how language shapes the way you think → link to the Russian summer camp in the story → the story never made explicit this theory but the film does even though it’s more pop culture-ish and not very accurate.

1:04:03: Chinese General Shang recording → “sets”: advantage, suits, honor, flower → Louise is asked to do Mandarin translation but she can only translate the words from Chinese into English she doesn’t understand what suits and sets mean

Conflict: China threatens to pull out and bring this to the UN after receiving “threatening” messages → they have to go back in to talk with the heptapods 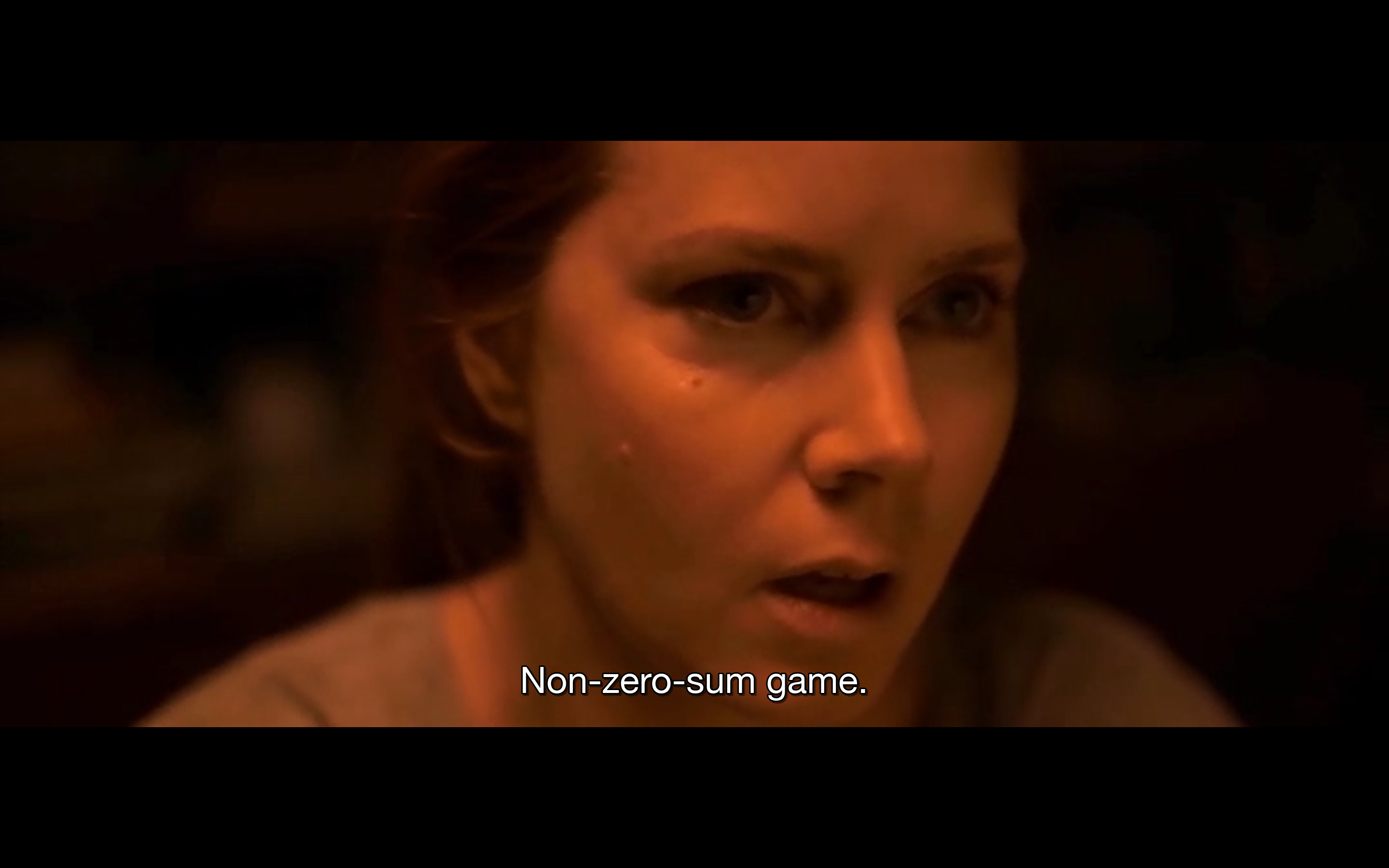 1:38:43: in the house of the child sequence → 1:39:00 at the party (there’s a heptapod writing flag) meets General Shang → “18 months ago”: they’re in the future talking back to this present moment → he told her she’s the reason why he’s at the party → she in the present sees what happens in the future then follow through with it:

1:40:46: back at camp Louise runs to get the phone, but as she goes on the phone she doesn’t know what to say → 1:42:07: party, never forgot what she said to him → General Shang told her-future about what she said → she knows what to say in the present → her knowledge of the future is both by herself and from others;

1:45:42: back at the house at the child sequence in the beginning of the movie

→ the story of your life → the day they “departed” because on that day Ian and Louise proclaimed their love for each other; 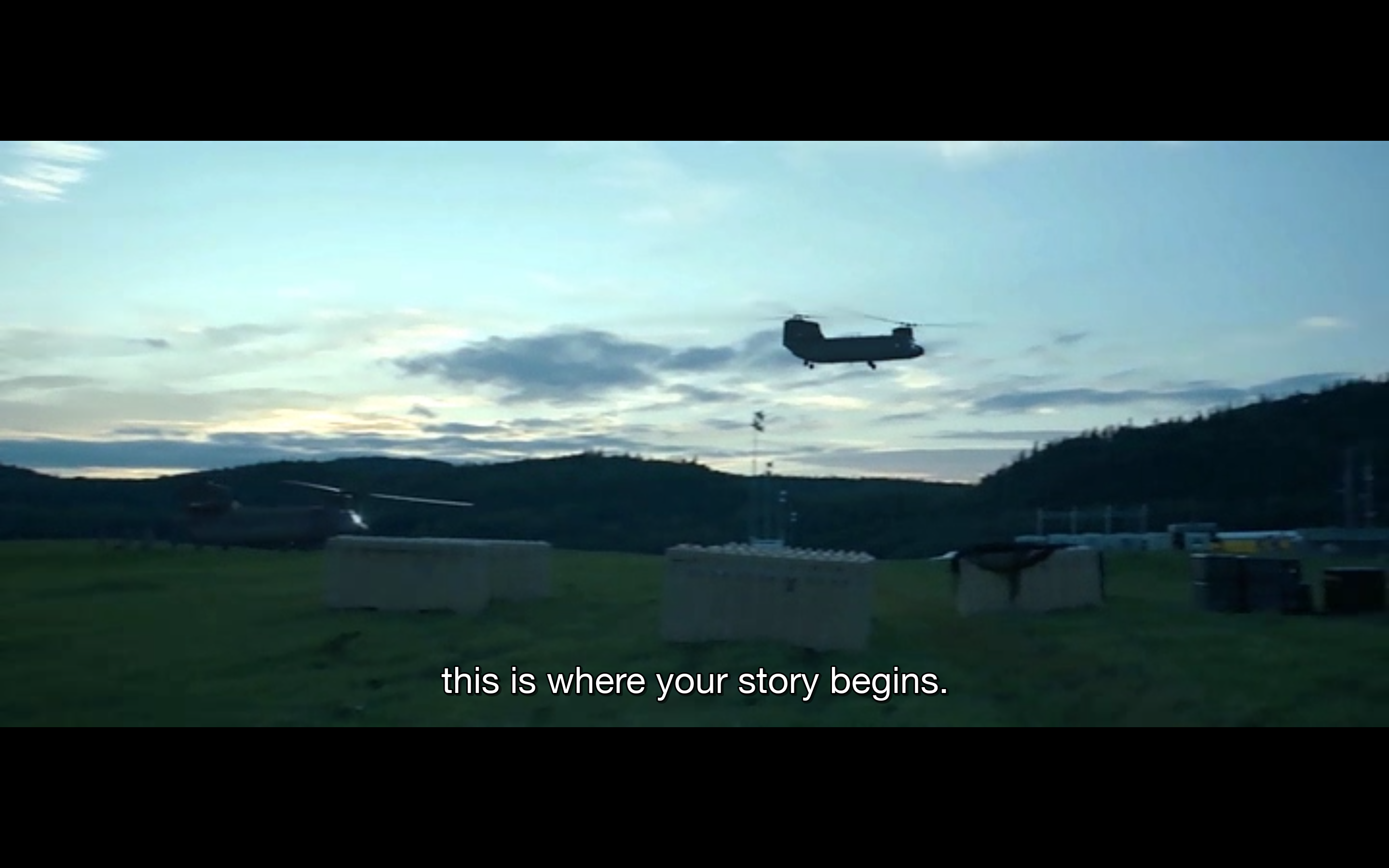 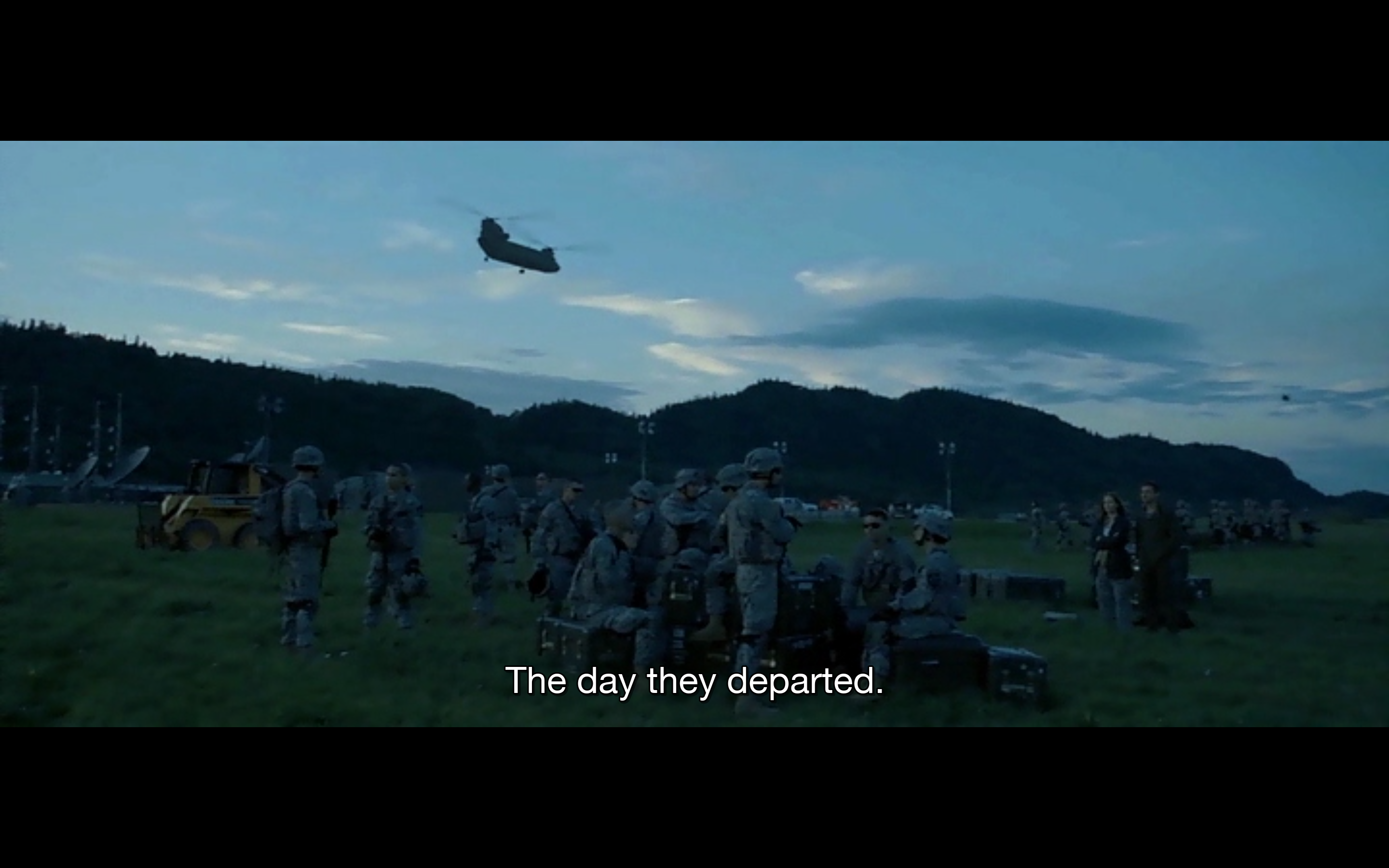 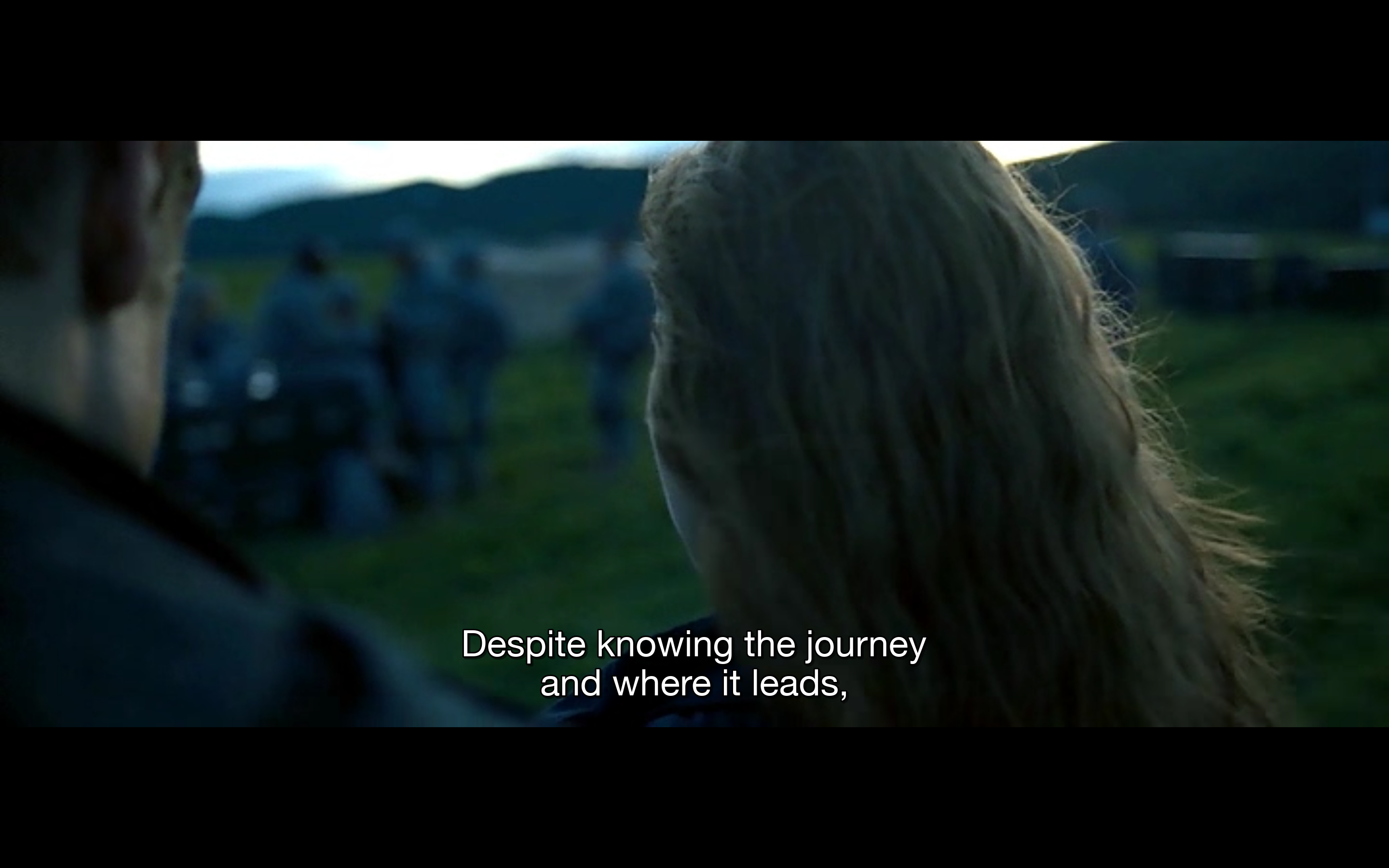 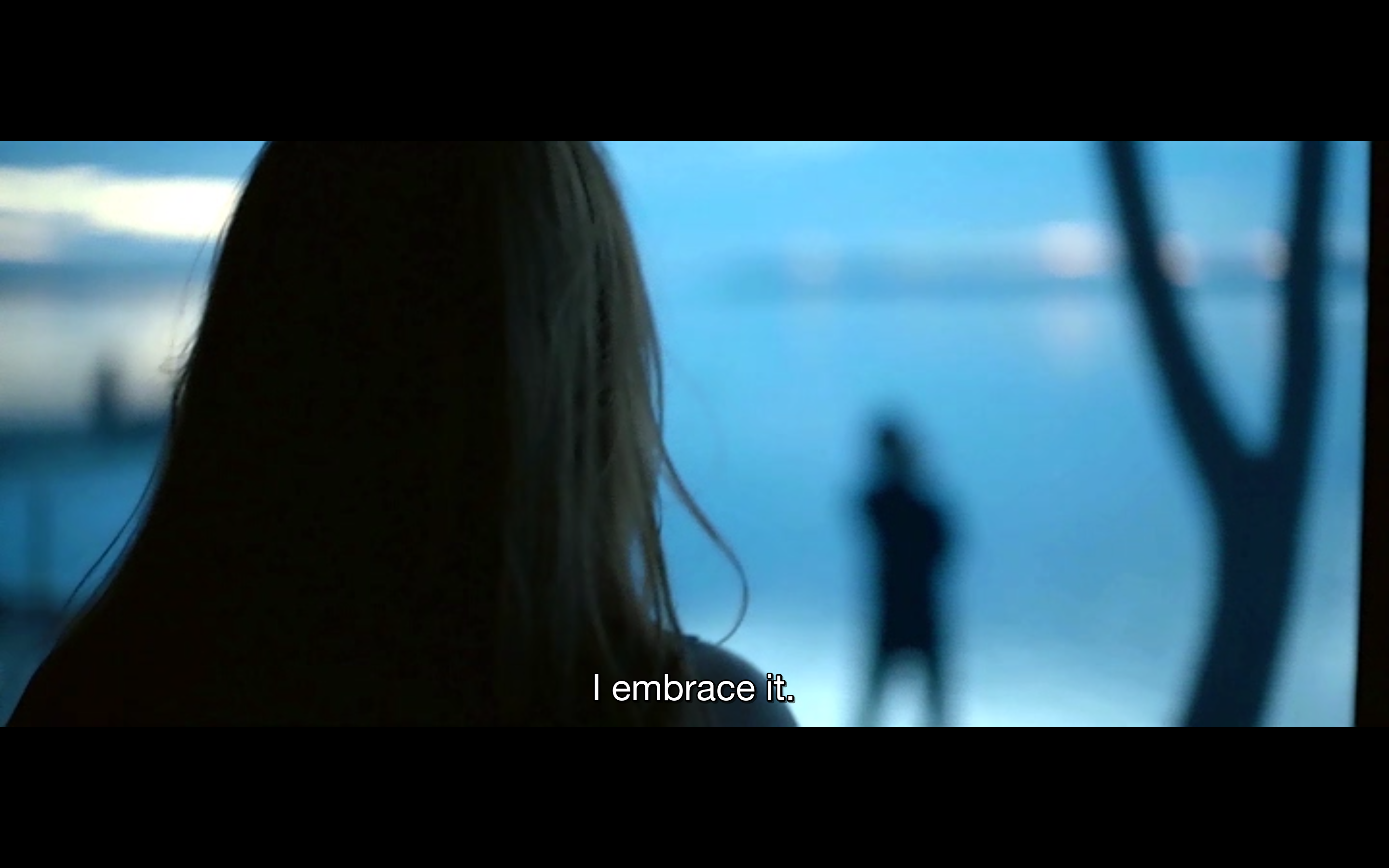 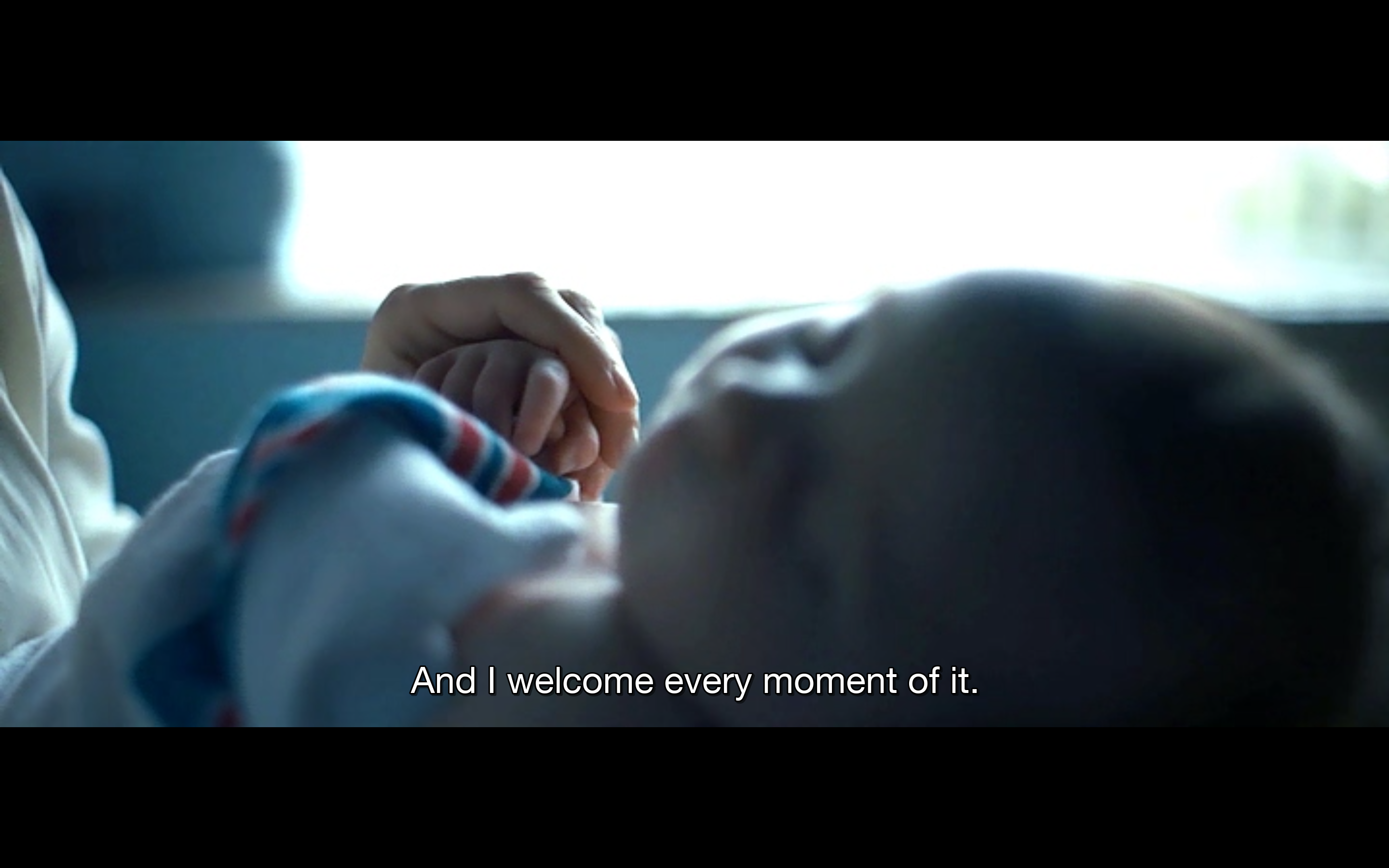 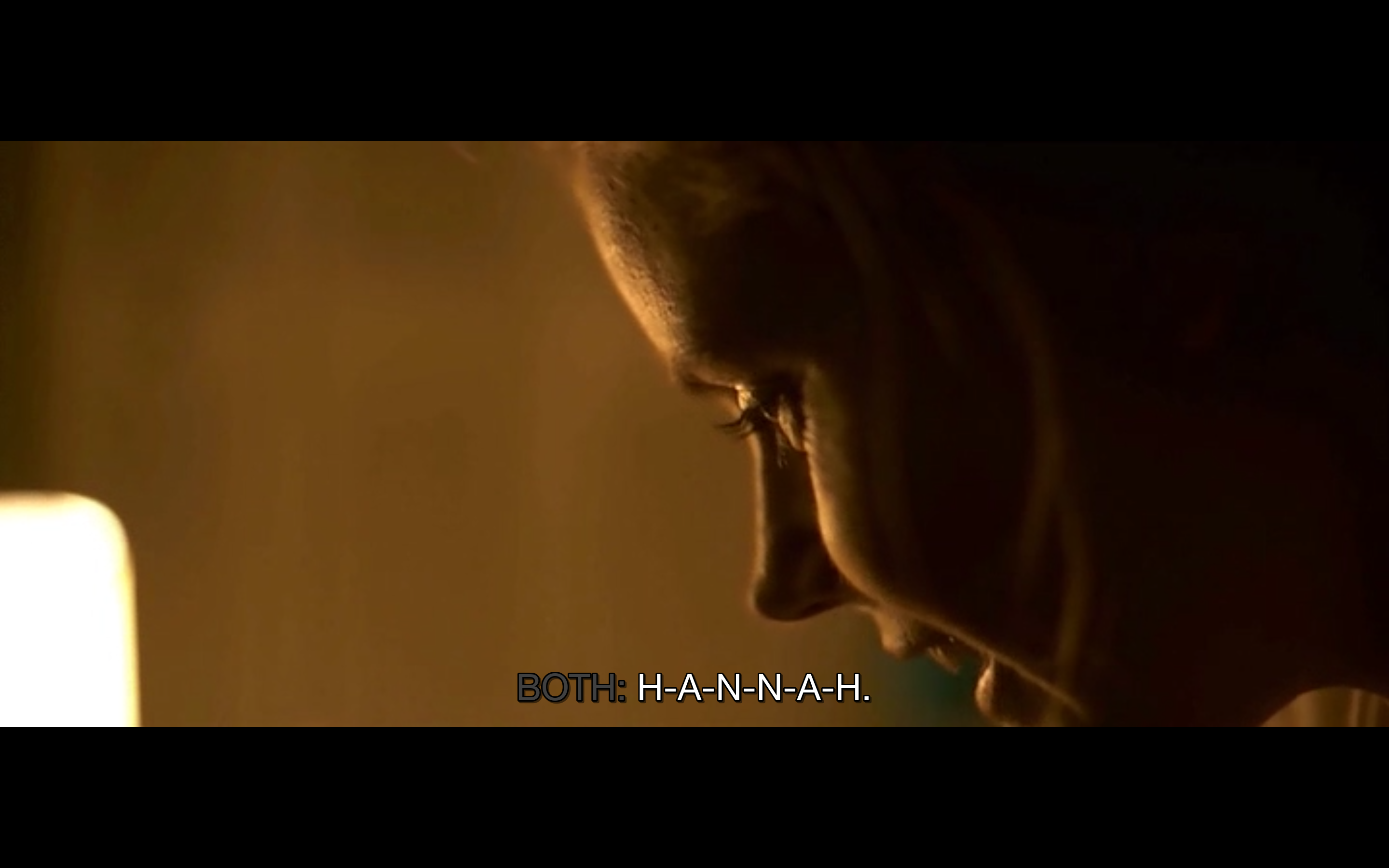 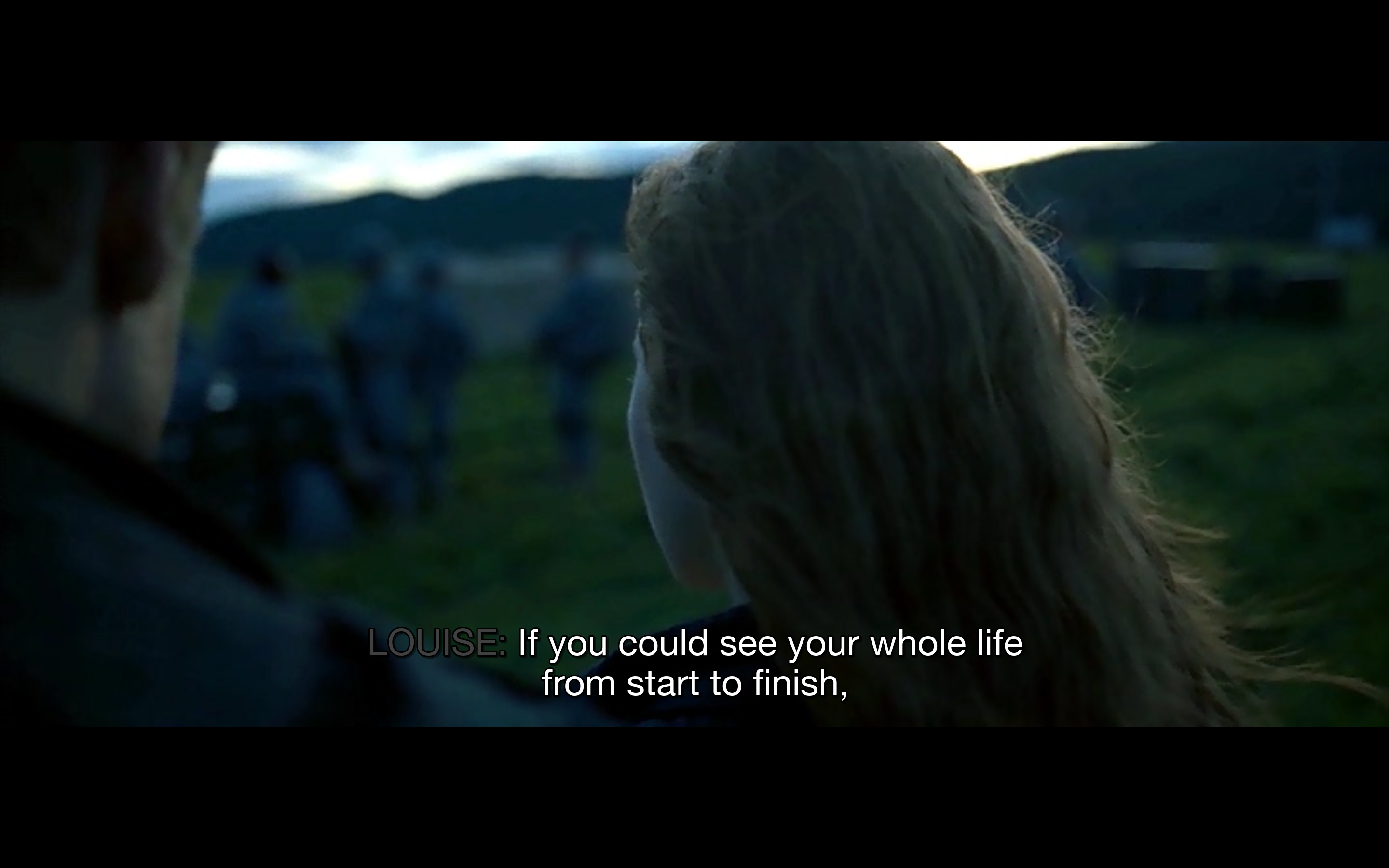 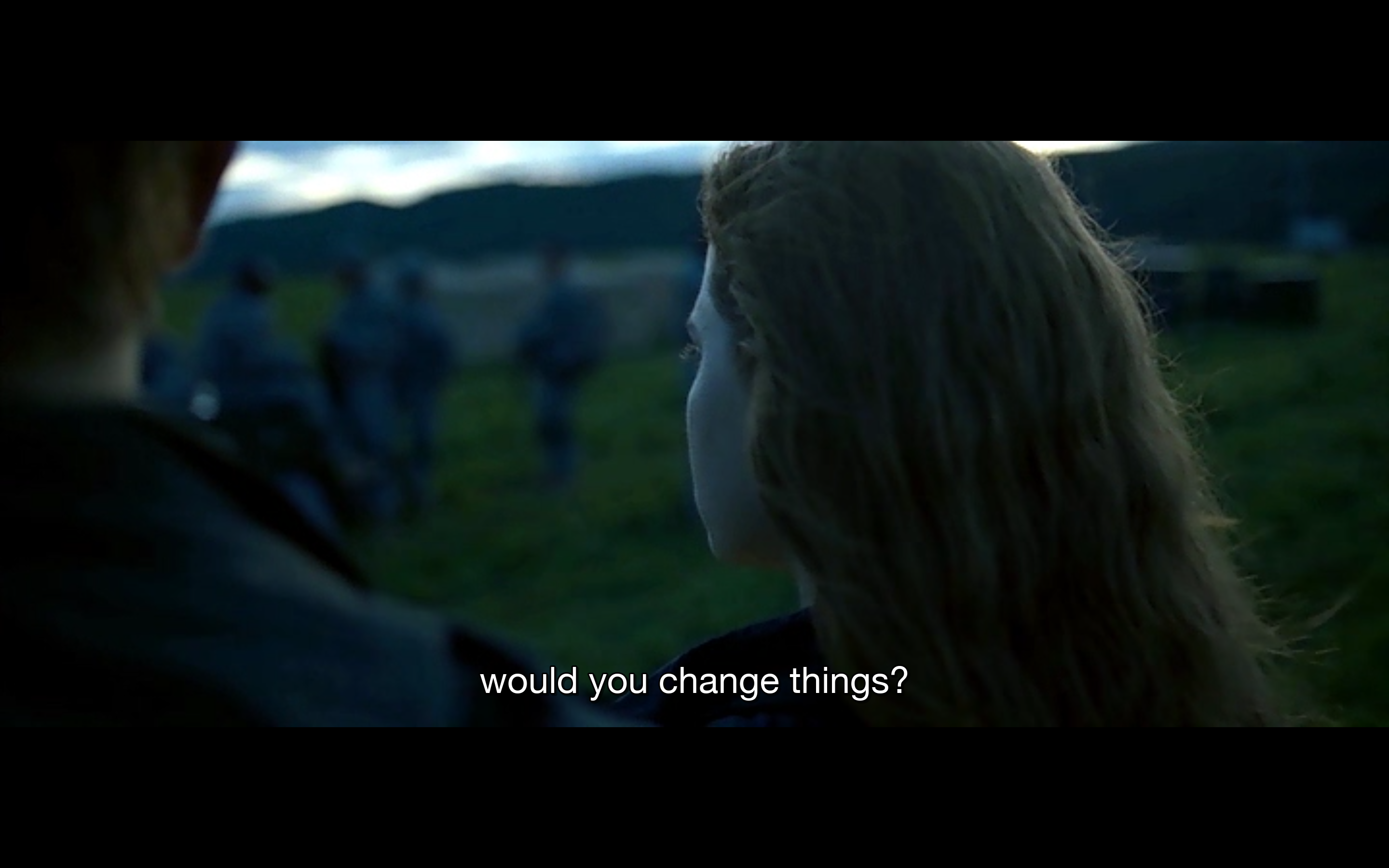 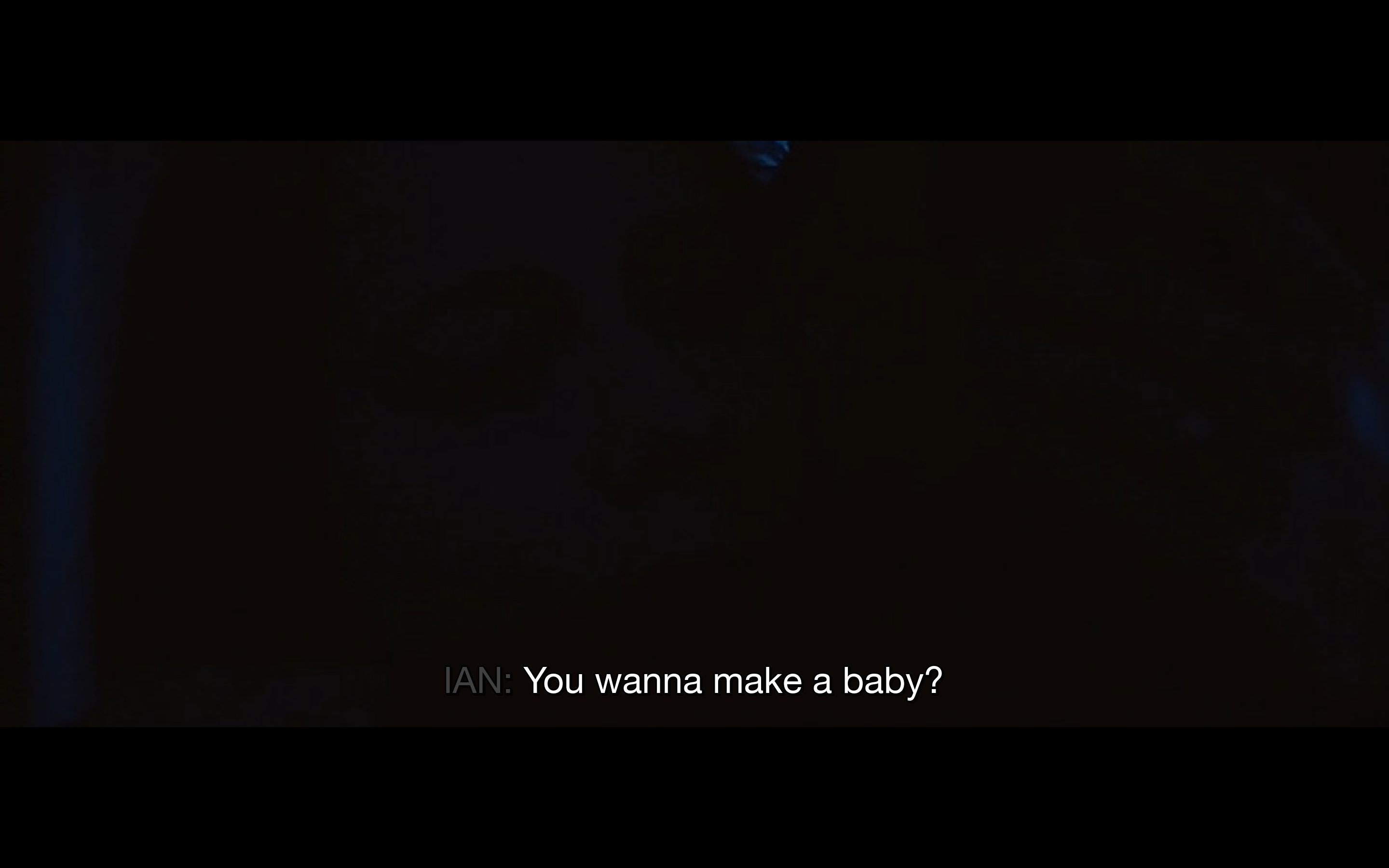 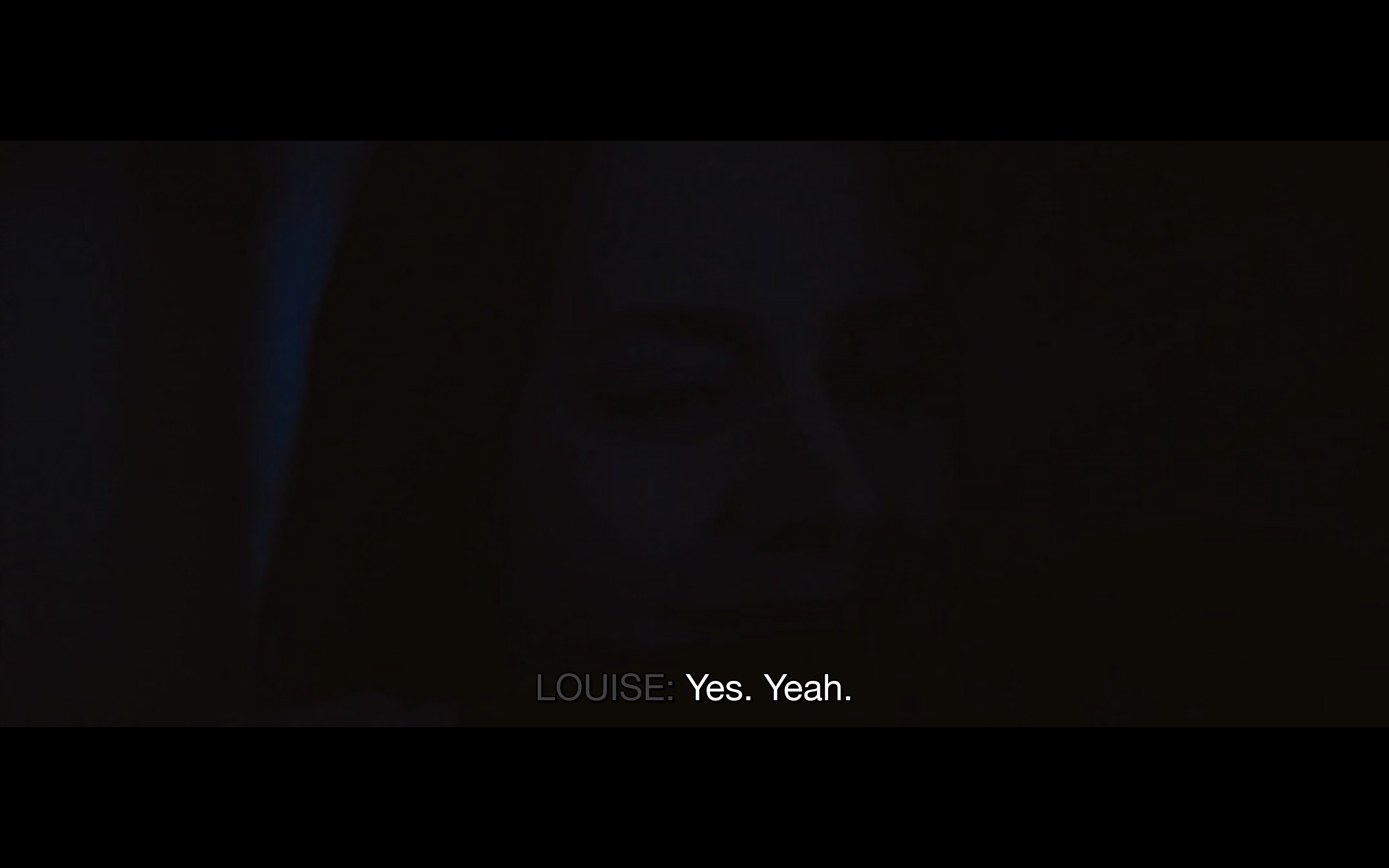 (and that kids is how you completely deconstruct a movie Derrida are you proud of me???)

4. The Sanskrit scene in the beginning of the movie: I was generally intrigued after watching this film twice so I googled and apparently so many people have the same question!

So at the beginning the Colonel visited Louise Banks at her university. After refusing to let her go see the aliens, he planned to go to Berkeley (I’d assume it’s UC Berkeley) to talk to another linguist, Wanders. She tricked the Colonel by telling him to ask Wanders for the Sanskrit word for “war” and its translation.

Later on at night when she was sleeping the Colonel took helicopters back to take her to the base camp. She asked what the other linguist said and he replied “Gavisti” meaning “an argument”. She said it means “a desire for more cows”. The Colonel then agreed to take her to camp.

So I consulted this website and they gave really excellent answers to this scene and I want to share what I found here!

Note: I don’t really know how accurate this is cuz I obviously don’t speak Sanskrit but this is a fun piece! Another example is teaching aliens mahjong instead of English! That’s also a good example of the thesis mentioned in the film about how language affects the way you think and perceive the world!

This site uses Akismet to reduce spam. Learn how your comment data is processed.